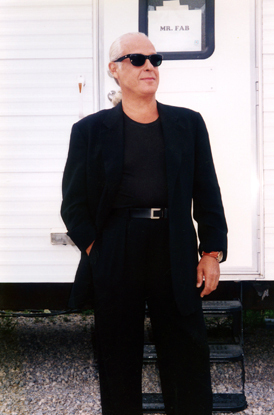 On June 8, 2011, Alan lost his second battle with cancer. RIP, my darling. We will always be joined at the heart.

JOINED AT THE HEART

My mother always told me to stay away from musicians. “They’re dangerous,” she’d say. “They are not sound marriage material.” Coming from a woman who spent her early 20’s dancing in one of Al Capone’s nightclubs and then married one of his capos, I allowed that Mom knew something about danger.

But her warning faded to inaudible when I made eye contact with the trumpet player in the recording studio. He didn’t look dangerous. He looked hot, with his sensuous chiseled lips, patrician nose and hooded hazel eyes, all framed by the wide-brimmed fedora favored by so many jazz musicians back in the day. This was my first foray into the New York studio scene, laying down tracks on five songs I’d recently written. It was the late 70’s and I had high hopes of becoming the next Carole King.

At the moment, however, my rock star dreams didn’t seem so urgent. The important thing was getting to know the trumpet player. When the session was over and the guys were packing up their instruments, I approached him and extended my hand.

“Thanks for playing my music,” I said.
“I’m going to fall in love with you,” he replied, and then he kissed me on the lips.

And fall we both did. It was a crazy courtship, an intense and urgent drama, played out in smoky jazz clubs, late night recording sessions and whatever beds, sofas, or other flat surfaces were handy. We even spent two blissful weeks in a honeymoon suite in Hawaii. But soon after we returned to New York, things fell apart. As a member of the newly formed Blues Brothers Band, Alan had an all-access pass to an endless buffet of models and groupies. Commitment was the last thing on his mind.

I was devastated when he moved on. I wrote dozens of songs about love and loss while I cried in my Chardonnay. I fantasized about performing on the Tonight Show and trading witty quips with Johnny Carson, while Alan looked with longing at the TV screen, rife with regret at what he’d given up.

But in my more sober moments I had to admit that even at age 33, I was not yet ready for commitment. To me, marriage meant changing my name, losing my identity, ditching my independence. My mother had sacrificed her career to become a wife and mother, and based on the strife in our house when I was growing up, I felt she’d made a poor choice. I had no intention of making the same mistake.

Almost ten years passed before Alan and I reconnected, after checking each other out from opposite ends of the bar in yet another smoky jazz club. I still hadn’t landed that longed-for recording contract, and had finally given up trying. The Blues Brothers Band was no longer touring since the death of John Belushi. We were both a little wiser, a little more settled. Not settled enough to get married, but enough to know that after all these years apart, we needed to be together.

And so we experimented with cohabitation, maintaining two separate residences, “just in case.” We spent most of our time at my place in the city, weekends and vacations at his home in the country, with occasional time-outs for each to enjoy some space. We were members of the Woodstock generation, free spirits, outlaws who thumbed our noses at society’s rules. We didn’t need a legal document to authenticate our love. We referred to each other as “husband” and “wife” without benefit of legal sanction – although at times I cringed when I used these words, feeling like an imposter who was just playing house.

Life was good, even glamorous. The band eventually resurrected itself under the banner, “the Original Blues Brothers,” and when my schedule allowed, I traveled the world with them, enjoying the view from backstage, albeit tinged with regret that I’d given up on my own performing ambitions. On one of these trips we strolled through Harrods of London. While Alan was browsing the food court, I spotted a Tiffany boutique just beyond the gourmet coffees. I dragged him over. There in the ring display was nestled the perfect little emerald, sandwiched between two small diamonds. “Isn’t it beautiful?” I gushed. “You deserve it,” he said. He signaled the salesperson to retrieve it from the case, and down on one knee he went. As he slipped it on my finger, he asked, “Will you marry me?” At last this “husband and wife” were officially engaged!

But we kept putting off that trip down the aisle. Life felt so perfect just as it was. Alan’s attitude was, “If it ain’t broke why fix it?” Mine was abject fear of change. Taking a vow of forever? That was still scary stuff!
And so we continued on as before, not taking vows, but making the little adjustments married people do for each other. He tolerated my passion for opera; I accepted his obsession with The Godfather. I prepared care packages of bagels, pastrami and lox, and overnight expressed them to his aging father in Florida. He decked his house with wreaths and holly, decorated a Blue Spruce and gave my now-widowed Mom an old-fashioned Christmas in the country – probably the best holiday she’d ever had.

“Alan’s such a wonderful man. When are you two going to get married?” she asked when he was out of hearing range, obviously revising her earlier assessment of musicians as “dangerous.” I couldn’t tell her that her own stormy marriage was one of the things that held me back, so I just smiled and said, “One of these days.”

While waiting for “one of these days” to arrive, we stood by each other in sickness and in health, for richer, for poorer, for almost 20 years. Alan sat with me at my mother’s deathbed. We made frequent trips to visit his ailing father, and I helped Alan pack up his dad’s belongings after he died. Eventually, we realized how few rights unmarried long-term partners have, so we took a few legal steps to cement our relationship. We made our wills, signed power of attorney forms, and appointed each other health care proxy. We opened a joint checking account.

And then came the true test of commitment. Alan returned from a four-week tour 35 pounds lighter than when he’d left. I couldn’t convince him to see a doctor. “I feel fine,” he’d say. “I’m just not very hungry.” I argued and pleaded but he was unmovable.

Meanwhile, we noticed that one of our closest friends, an upstate neighbor, had also undergone a tremendous weight loss over a short period of time. Six weeks later, Dickie died of the cancer that had riddled his body. He, too, had had an aversion to doctors. On the morning of his passing, I was beside myself, terrified that Alan might be facing the same fate. I phoned him in the country. “This is it,” I said. “I just made an appointment for you with Doctor Morrison. If you don’t get yourself into the city and keep that appointment, we’re over. I’m not going to sit around and watch you die without fighting.”

I broke out into a cold sweat after I pronounced this ultimatum. If Alan still refused medical treatment, I would have to live up to it. Was I really ready to do that? There was a long pause. “Alright,” he sighed. “I’ll drive into town tomorrow.”

And thus began a journey that required all the strength, fortitude, compassion and commitment that both of us could muster. We would soon be putting into practice more than we ever envisioned marriage vows would require. After a battery of tests, Alan was diagnosed with lung cancer. Inoperable, we were told, because it was small cell. The only course of treatment was chemo and radiation.

We were lucky. The small tumor was confined to one spot. We had caught it early. We got into Memorial Sloan Kettering and received state of the art medical treatment. Note I keep saying “we.” Because now we were joined at the hip, 24/7. I became the co-dependent caretaker. I kept track of his medical appointments, answered for him when his doctors asked questions, filled out his insurance forms, ran interference for him when he didn’t feel like taking calls, hovered over him making sure he took his meds on schedule, and tried to ensure he ate nutritious meals. I even developed a pain in my chest, in the same spot where his tumor was located. I didn’t know where he left off and I began.

Amazingly, Alan never got sick or nauseous during the grueling months of treatment. Depressed, yes, but then, we both were. Depressed and tired. There were days neither of us felt like moving, and the two of us would lie in bed watching the stocks fluctuate on CNBC. As if money mattered. For richer, for poorer, we now knew the most important thing in life is health.

One year after that first doctor’s appointment, we received the news that Alan’s scans were clear. The unbearable burden we’d been carrying had finally been lifted. We beat cancer! We did it together! We decided to celebrate.

And so on December 18, almost thirty years after first meeting, we stood in front of the Manhattan City Clerk.
“Today,” he said, “Alan and Mary pledge to live the rest of their lives as one. These are two independent people who are joining together because they can see and they can feel how much better their lives will be.”
Yes, I was saying silently. This feels better. This feels right.

After we repeated our vows, and just before pronouncing us legal, he gave us a most beautiful blessing, one any minister or rabbi would be hard-pressed to top: “Alan and Mary, we wish for you a love that makes you both better people. That continues to give you joy, and that provides you with the energy with which to face the responsibilities and challenges of your lives together.” Comforting words, considering the challenges we’ve already faced!

So I am now a bride. Not exactly blushing, but I am flush with gratitude at the gift we’ve been given.
After all we’ve been through, I’ll never take life – or love – for granted. I will savor every day that I am legally bound to this man, knowing now that the real danger lies in avoiding commitment, in depriving oneself of the peace and joy and yes, serenity, that comes with finally being married. Because even though nothing’s changed, everything has. We are married in the eyes of the law, not just in our own perceptions. And that means I will never again squirm with discomfort when I refer to myself as “Alan’s wife.”
But still, I’m keeping my name.

Excerpt from JOINED AT THE HEART: My Life With Mr. Fabulous

Joined at the Heart
My thirty-three year journey with trumpeter and Blues Brother Alan Rubin.

Killerfest
“Set at a conference for aspiring mystery writers, Killerfest is funny, clever, and WAY too perceptive about the secret lives of authors. You'll love it!” Amazon 5-Star Review

Racing the Train
Setting the stage for a lifelong struggle.

A Night With the Nuff's CD Liner Notes
This is the band musicians come to hear.

The Writer's Guide to Corporate Communications
"A must for every writer interested in breaking into corporate communications."
--Samuel Cypert, VP MASCO